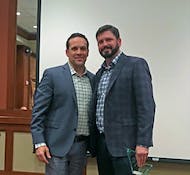 What differentiates the DiGeronimo Companies from our competitors is not only what we do, but the approach we take. Our founders, Sam, Mary, and Don DiGeronimo, built an organization woven by our core values of commitment, loyalty,respect, integrity, innovation, quality workmanship and safety. To this end, the DiGeronimo Companies Founders’ Award was established to recognize and honor employees who exemplify those values through work, as well as their daily lives. This  recognition is the most prestigious award presented in our companies. This year’s recipients are Justin King and Michelle Mahon.

Justin King started with us as a field laborer and has evolved into performing one of the most important roles in the company, our chief estimator. In this role, he is involved in most of the projects we acquire and is responsible for organizing and leading our estimating department.
His innovation, creativity, and ambition have led to several project acquisitions by delivering better ways to build jobs. Justin is constantly working to create value for customers through efficient civil designs, yet his role does not end there. Justin inserts himself into technology upgrades, marketing, and equipment decisions, among other functions. Justin’s role has grown as our company has grown and he has constantly embraced that challenge. Our company success can be attributed to leaders like Justin. 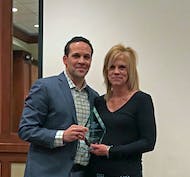 20 years ago, Michelle Mahon stepped in as our payroll manager and never looked back. She  seamlessly picked up our payroll process, which at the time, entailed around 200 employees mostly
working in northeastern Ohio. Today, she ensures more than 750 team members in over 10 states get paid weekly. To most people this may seem like she is just doing the job she was hired for, but as the company has grown, she has had to learn new payroll information for different states, union rules, and types of work we perform. This involves complex state payroll tax knowledge and reviewing
numerous union agreements that change annually. Her job is tedious and often thankless, but she works day after day to ensure the success of the team. Michelle looks after our company as if it were
her household, and we have benefitted from having her husband and both sons as part of our team as well. We thank Michelle for going above and beyond, as well as her honesty and loyalty.