On December 6, 2017, the City of Cleveland Department of Port Control (DPC) officially awarded Independence Excavating, Inc. (IX) the $24-million dollar, Phase 1 contract of the North Airfield Improvement Project. This project encompasses 5 phases: phases 1–3 will be need to be completed by November 15, 2018, and Phases 4–5 to be completed by July 15, 2019. 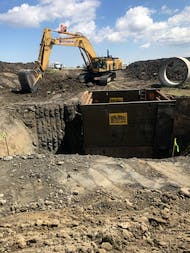 The aggressive project schedule includes the final project completion milestones, as well as intermittent milestones that must be met in order to meet the FAA’S Cleveland Hopkins International Airport North Airfield Improvements NOTAM’S (Notice to Airman’s), which includes the opening of active taxiways and runways. Some of the major technical items include 1,400 LF of 120-inch RCP,
2,900 LF of 114-inch RCP, 2,300 LF of 96-inch RCP, and 1,000 LF of 84-inch RCP storm sewer that averaged 32' in depth. The drainage system also includes 10 cast in place structures that averaged 20' x 17'. The scope required construction of a new high-speed taxiway, which includes a new 6-inch underdrain, 16-inch Portland Cement Concrete Paving (PCC), 8-inch lean concrete base, variable depth P-219 aggregate base course, new hot mix asphalt shoulders, and new taxiway lighting and signage. The installation of the large diameter pipe required crossing of existing taxiways and included the removal of 125,000 SY of existing 16- inch PCC, econo-crete, asphalt treated base, and miscellaneous aggregate base material. One innovation IX developed was a plan that was approved by DPC to crush existing concrete pavement on Taxiway C that was being removed. The crushing produced #57 aggregate to be used in the pipe trenches and P-219 material to be used as pavement subbase.

There were several major project hurdles that IX had to contend with on this challenging project. The first involved procuring, starting production and taking delivery of the 120-inch pipe months in advance before the actual April 15 start date. With the help of our RCP supplier, IX was able to meet the production of the large pipe prior to the milestone start date, however we were not permitted to take delivery and stock pipe on site for installation until April 15. The original plan was to stockpile a significant amount of the pipe on site because only 8–10 pipes could be delivered each day, and without the stocked pipe, IX could not meet our installation productions and the milestone dates required. Stocking on site was denied due to new FAA regulations, which was contrary to the information received during the bidding process. This delayed the start of the 120-inch installation by +/- 30 days for which the city granted IX a time extension for Phases 1 & 2. The second hurdle was the proximity of the project being in the middle of an active airfield and having to cross active taxiways with the use of flaggers. Lastly, IX had to protect and support some very large and critical FAA electrical duct banks that crossed the sewer trenches.

Currently, IX has completed installation of all of the 120-inch pipe and has moved into Phase 2 ahead of schedule. The project will shut down late fall and will restart in the spring of 2019.