Growing up, most young boys dream of driving a dump truck, operating an excavator and everything in between. Jack hoped to operate heavy equipment on a construction site one day. On Friday, June 8, Jack’s wish to work in construction came true through the help of A Special Wish CLE and Independence Excavating. 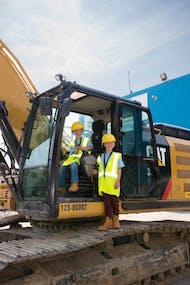 Jack and his younger brother, Ben became “Foremen for the Day” at Independence Excavating. They arrived mid-morning at the Independence Excavating Heavy Shop, where their machines and equipment are prepared for job sites. Jack and Ben were greeted by some of the Independence Excavating team. Just like a foreman, they were presented with an Independence Excavating t-shirt, vest and construction boots to prepare for the big day ahead of them. Then, they were given a tour, which had different pieces of equipment and machines to climb in.  After the tour, Jack and Ben headed just up the hill to their main office. There, they were greeted by more team members and given a little history about the company. After that, they were off to work! They worked on a digitize machine to create their very own blueprints with one of the engineers. Jack and Ben had to break for lunch before heading out to the job.  While they ate, they enjoyed watching video footage of past demolition jobs. They liked seeing the buildings fall over. They then headed off to the Cleveland Hopkins Airport job with a Project Manager.  When they arrived they were presented with hard hats and safety glasses. Jack and Ben were officially ready to report for duty!

After their job was complete, Jack and Ben headed to the ARFF Facility. They received a warm welcome and a Mayor’s Proclamation. They went on a tour of the Cleveland Firehouse and were given an airport escort to their next stop, a United Airlines aircraft. The boys got to get into the cockpit and make announcements over the intercom!