Independence Excavating (IX) was awarded the rough grading and underground utilities contract for construction of The PSEG Keys Energy Center (Keys) in Brandywine, Maryland. Keys is a new clean, natural gas-fired, power plant in Prince George’s County, Maryland and is targeted to be in operation in 2018 and is owned by PSEG Fossil, a subsidiary of PSEG Power. 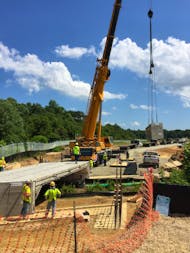 The PSEG Keys Energy Center project is being constructed on a 180+ acre parcel of land previously used for a sand and gravel mining operation. The site is located north of North Keys Road approximately 1.25 miles east of Brandywine, Maryland. The proximity to linear facilities was a key factor in site selection. The proposed site has an existing 500-kV transmission line right-of-way located on the western side of the property allowing the project to directly connect to the electrical grid. A major interstate natural gas pipeline is in close proximity. The capacity of Keys is 755-Megawatt (MW) natural gas-fired, combined cycle electricity generating plant and will provide generating capacity to power 500,000 homes in Prince George’s and surrounding counties. The project will provide $825-$875 million investment to the local and regional economy.

Our scope of our work included clearing and grubbing, erosion and sediment controls and rough grading (RG) including the construction of a three acre, 26 foot high surcharge pile in the main power block area with a volume of 100,000 CY of dirt excavated from an on-site borrow pit. The purpose of the surcharge was to consolidate the subgrade soils to a density to allow construction of the plant. The RG also included subgrade construction for access roads, a substation, switchyard, laydown areas and trade contractor parking areas. The access roads, laydown and parking areas required IX to place six acres of geotextile fabric and 60,000 tons of stone subbase.

The underground utility component of our scope includes installation of 3,000 LF of 4" sanitary force main, 2,600 LF of 10" waterline and 2,600 LF of 12" steel natural gas pipeline. One unique feature was the construction of a three sided, skewed culvert over the existing creek that divided the site. The culvert was designed and fabricated by Old Castle Pre-Cast and was comprised of six sections – 32'-4" wide, 4'-4" long and 4' high. Each section was skewed at 45 degrees and weighed 22 tons. This culvert will provide access to the plant site for the heavy haul components required to construct the plant.

On a project as large as this, there were several challenges that had to be overcome. First, the project was adjacent to a designated wetland and sediment runoff had to be prevented through extensive erosion and sediment controls. Second, the north and south sides of the project were separated by a narrow pinch point in the main access road requiring single lane traffic of all vehicles including heavy earth moving equipment. During utility installation, the water table was found to be within 12" of grade and required pumping the sediment laden water into frac tanks to allow the sediment to settle before discharge. Lastly, due to the high moisture content of the existing soils and unsuitable soils, extensive moisture conditioning with lime and undercutting was required to prepare subgrade for construction.

We were pleased to complete this project on schedule and have a part in providing clean energy to Maryland.